James’ father was his most significant musical influence.  He was a gifted pedal steel and lead guitar player.

While James was in grade school, he would often accompany his father on Folgers coffee cans.  After demonstrating his talents, somewhere… around the third grade, his father purchased him a full set of Slingerland gold metal flake drums.  The rest is history.

James later toured in the state of Oregon as a drummer in a three-piece country band; while at the same time he was dabbling in guitar.  Overall he has always felt more comfortable as a guitarist, but still enjoys pounding out a beat now and then.

He has formed good friendships, and has grown as a musician with the RDB.  He is excited about the RDB and is looking forward to the band’s future endeavors. 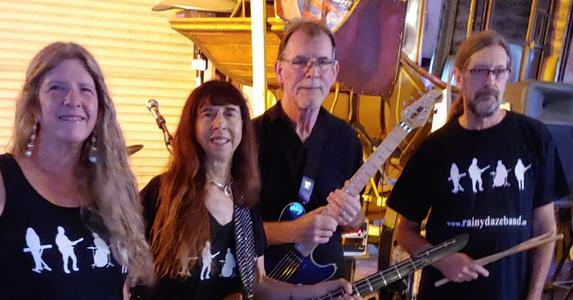 Involved for 10 years in choirs at an early age, Mary's interest in harmonies was obvious. She chose to pursue music by playing jazz & blues piano, and later picking up the guitar when she moved from Minnesota to Arizona. Songwriting was what drew Mary and Charley Reyes together initially, although there were several musical projects that they didn't have in common, where she did rhythm and vocal tracks in the studio, and other musical projects such as backing an "Elvis" and a "Janis Joplin" for specialty shows. Together they have had such bands as Beyond Reason, the Hobby Sinclair band, Street Legal and for the last seven years in the variety band, Rainy Daze, where they are proud to have been founding members, playing with a variety of talented musicians in such places as Old Tucson Studios, American Legions, Amvets, Elk's Clubs, Desert Diamond Casino, Casino del Sol, and a wide range of private parties and weddings.

Elana Rose, from Minneapolis, MN, has a classical music background. She started playing cello in grade school, and over the years has performed with various orchestral groups.

She has also been singing since she was a child and made her debut performance on cable TV while in grade school.

She began singing and playing professionally in Tucson bands in 1987, with ‘Quest’, a new age folk rock originals/covers band. She then did lead and backup vocals, and played rhythm guitar, with a Country and Classic Rock band called Steel Rose. Later, when Steel Rose changed to just Country music, she took up bass.

Elana was a member of the Desert Fire Band for 13 years, playing all over Tucson and Southern Arizona, at a variety of venues, including RV parks/resorts, private parties, and clubs. The band played so often at the Crystal Palace that everyone thought the band members lived in Tombstone! After Desert Fire folded, Elana played out with a few other bands - Exit 303 (Benson), Ghostriders (Tucson), and Cornerstone (Green Valley) - before joining The Rainy Daze Band.

She is delighted about being a member of RDB, and she looks forward to sharing some great music with you.

My Mom and Dad were professional musicians that performed weekly radio broadcasts in New York city in the 50's. I became interested in playing drums when I was 8 as a result of my father's influence and began subbing for him in clubs at 15.

While attending high school I was a member of the marching and swing bands. My wife and I ran a cat shelter in Massachusetts before moving to Arizona in 1984, I've enjoyed playing in various bands in the Tucson area since then.

Mike took classes at Julius Hart school of music in Hartford CT and after high school he joined a band called "Front Row" where he played continuously for 3 years performing in restaurants and private parties.

The Rainy Daze Band is composed of musicians who  love playing music and are excited to see others dance and enjoy their music.

Our song list covers a wide range of highly popular music ranging from the 50's up to current top hits, and in genres of classic rock/pop, popular and rockin' country, blues, and even a few disco hits.

Rainy Daze Band is available for any venue to keep the dance floor packed and the crowd ready to party and have a fun time.